What Are Business Rates?

All you ever wanted to know about business rates but were too afraid to ask
Quantum Mechanics. Business Rates. Dark Matter. Area 51.

What do these things have in common? All things we feel very few people actually understand!

Well, we might not be Dr Stephen Hawking or Dr Brian Cox, but we’re here to help with one of these – business rates. We will break down the origin story, who sets them, how they are calculated and things to be wary of. So buckle up, sports fans! (Yes, if you own a sporting ground, you will also have to pay business rates!) 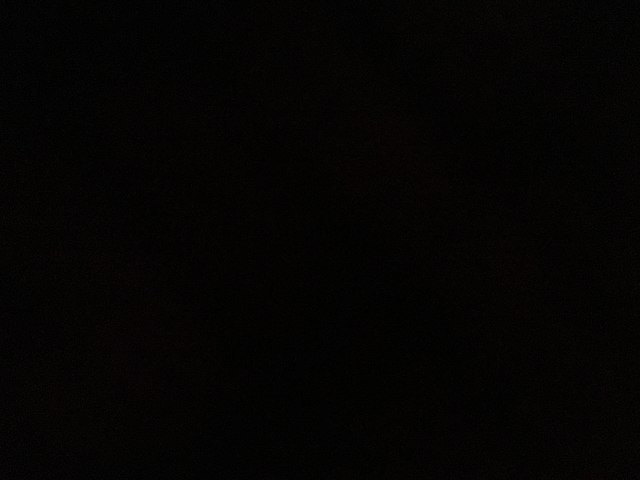 Here’s a picture of some dark matter


What are business rates?

Also known as National Non-Domestic Rates, put simply, business rates are the equivalent of council tax for non-residential properties. It's really that simple. The taxes used to be one and the same, but that changed in the late 1980s - more on that in the origin story below. Business rates are in place so that businesses contribute to the upkeep and maintenance of the local area they occupy.

Where do business rates come from?

The origins of business rates are said to stem from the Vagabonds Act of 1572. Obviously, you know all about that, but for those who missed that history lesson, it was a set of laws passed to tax inhabitants of a parish to help care for the poor and vagabonds in that parish! You could get thrown in the gaol (prison) for not paying!

More recent history shows that the business rates system we know today was developed by the 1967 General Rate Act. This was a blanket law for taxing all properties - residential and non-residential - based on their rental value. This is effectively the same today.

In 1988, The Local Government Finance Act replaced the General Rate and split the taxes into residential and non-residential. The residential tax was 'Community Charge', then 'Poll Tax' and now the 'Council Tax' we know and love paying. The other tax became known as Non-Domestic Rates or business rates.

How are business rates calculated?

Thankfully, the calculation to work out business rates is pretty simple - just a simple multiplication! As long as you have the right numbers, it will be easy as pi: 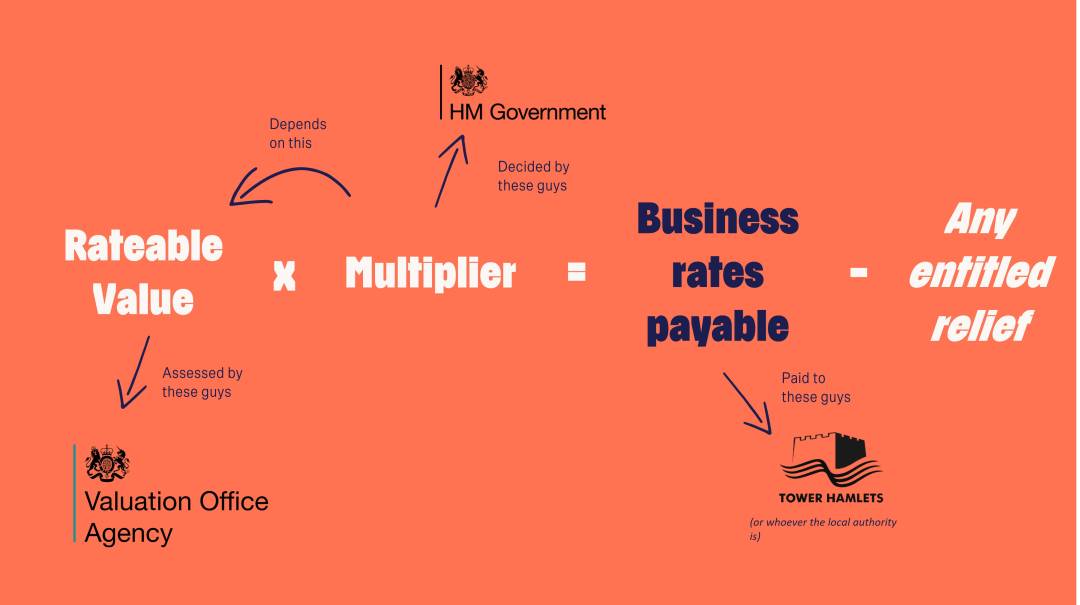 Ok, so on the face of it, you’re thinking 'what the heck a "Rateable Value" is’ and 'multiplier of what’?! So let’s break it down.

This is the annual rental your property would have been expected to achieve when the rates are set. This rateable value is set by a governmental agency called the Valuation Office Agency (VOA) - the same people who set values for Council Tax.

The rates are supposedly revised every 5 years, though the 2015 revisions were delayed to 2017 and the 2021 revisions have been delayed until 2023. It seems to be one of those tasks they just don't get round to - like taking the bins out or fetching that tartan paint my boss asked for.

However, Rishi Sunak, when he was Chancellor of the Exchequer, announced that rates would now be calculated every 3 years, instead of 5. So your guess is as good as ours as to when they will next be revised. But don't worry, the VOA will update their database as soon as this is done!

In England, there are generally two different multipliers – which one you pay depends on your rateable value! The exceptions to the rule are: 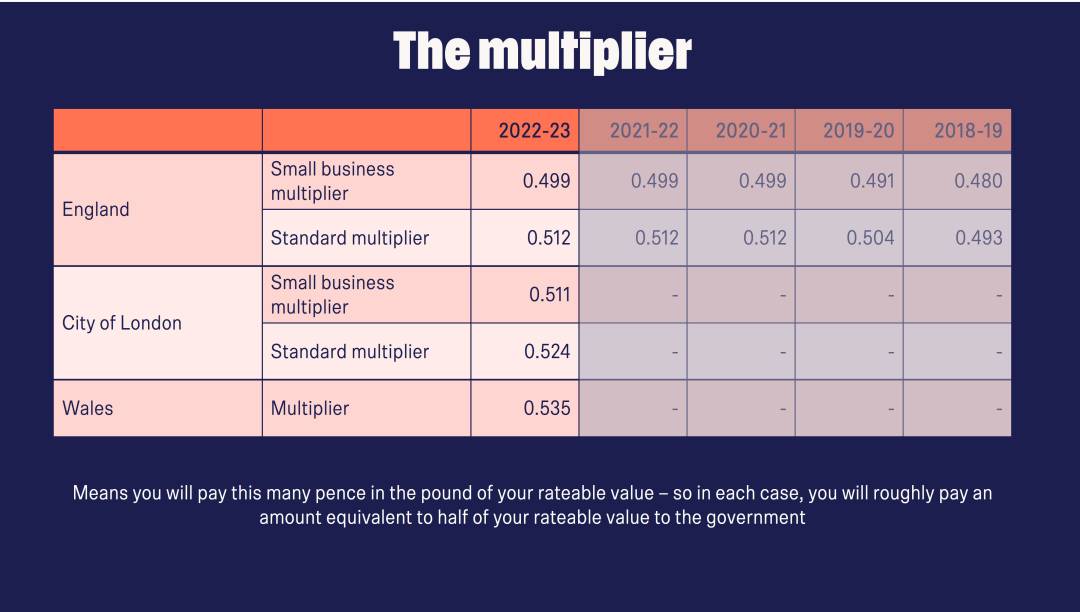 The multipliers are set by the government and are revised each year in April. The annual increase is capped, so don't worry, it shouldn't sky rocket in one year, but will be a gradual increase.

For those interested - the cap is set as the proportional increase in the Retail Prices Index from the previous September. So as long as we haven't had record-breaking increases in inflation recently, we will be fine... 👀 (If you are reading this a while after writing, just take a quick look at UK inflation rates leading up to October 2022.)

Now then, class, let’s take a look at some worked examples. 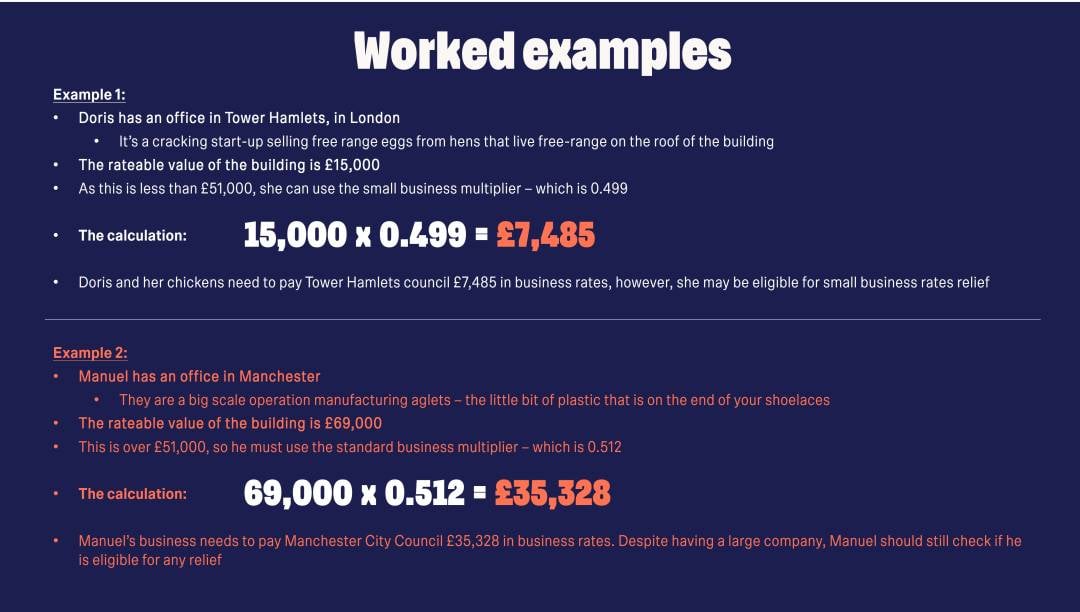 When should you pay business rates?

If you own the property, the business rates are your responsibility. You can pass these onto your tenants if you have tenants in your space. Alternatively, some landlords may choose to pay the rates themselves and include that cost in the rental.

Good news! There are loads of different types of relief you can apply for:
You can click here to see if you are eligible. These are granted by the individual councils, so you will need to apply to the relevant council directly to gain relief.

Disclaimer
Whilst we might be like the Physics equivalent of a Dr Brian Cox & Dr Stephen Hawking love-child when it comes to business rates, we are not qualified financial advisors. If in doubt, always check with your local authority. They're the ones collecting the money, so they will know how much you owe!

What Commercial Tenancy Contract Is Right for Me? Leases vs. Licences

Navigating the complexities around commercial contracts can be tricky. Let us he...